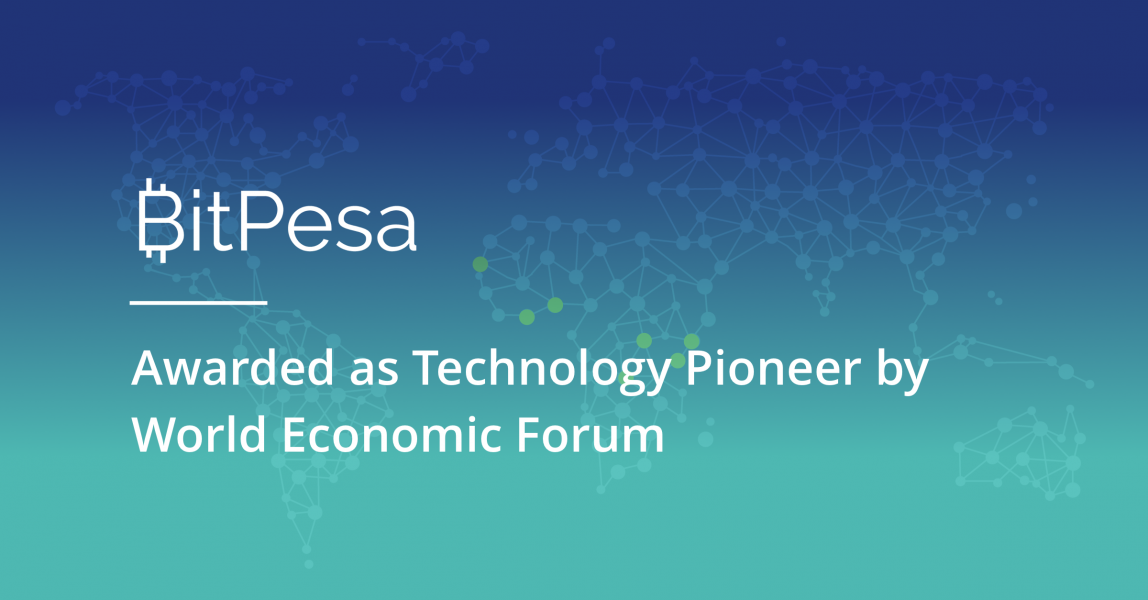 We’re very happy to announce that BitPesa has been named as one of the 61 most promising Technology Pioneers in 2018 by the World Economic Forum. We have been recognised for our work in facilitating faster and cost-effective cross-border transactions in, out and within Africa using the blockchain settlement.

The World Economic Forum Technology Pioneers are early-stage companies from around the world that are involved in the design, development and deployment of new technologies and innovations, and are poised to have a significant impact on business and society. This year’s selection is the most diverse ever, both geographically and in terms of gender. 23% are female-led, and a majority (53%) come from regions outside the United States and Silicon Valley. The pioneers’ focus is just as diverse, with technologies including artificial intelligence, big data and internet of things (IoT), biotechnology, blockchain, autonomous vehicles, cyber security, vertical farming and other agricultural advances, decentralised microgrids and robotics.

As Fulvia Montresor, Head of Technology Pioneers at the World Economic Forum described:

“We welcome BitPesa in this diverse group of technology pioneers. BitPesa and its fellow pioneers are front and centre in shaping the ongoing Fourth Industrial Revolution and we believe they will be transforming society and industry in a positive way in the years to come.”

The Technology Pioneers were selected by a selection committee of more than 60 academics, entrepreneurs, venture capitalists and corporate executives. The committee based its decisions on criteria including innovation, potential impact and leadership. Past recipients include Airbnb, Google, Kickstarter, Mozilla, Palantir Technologies, Spotify, TransferWise, Twitter and Wikimedia.

Our customers and supporters have made this possible, as they are the true confirmation of what the blockchain can do to ease formerly painful business processes. BitPesa has grown to more than 7 markets in 5 years while creating hybrid financial infrastructure that is equally accessible and efficient. BitPesa’s customers include large multinationals, SMEs and traders who have grown alongside the company. Africa is playing an increasingly pivotal role in the global economy and BitPesa seeks to empower businesses and entire markets at a level of macroeconomic engagement.

Following this award, BitPesa will be at the World Economic Forum Annual Meeting of the New Champions in Tianjin, China from September 18-20. Our CEO will also attend the Annual Meeting in Davos, in January 2019, where she has previously spoken about blockchain, regulation and development in frontier markets like Africa.

We thank the World Economic Forum for this honour! Thank you to the entire BitPesa team for the smart work that has gained us this recognition. Ultimately, thank you to all our customers and partners that entrust us to provide the best service for their business needs!

This website uses cookies to improve your experience while you navigate through the website. Out of these cookies, the cookies that are categorized as necessary are stored on your browser as they are essential for the working of basic functionalities of the website. We also use third-party cookies that help us analyze and understand how you use this website. These cookies will be stored in your browser only with your consent. You also have the option to opt-out of these cookies. But opting out of some of these cookies may have an effect on your browsing experience.
Necessary Always Enabled
Necessary cookies are absolutely essential for the website to function properly. This category only includes cookies that ensures basic functionalities and security features of the website. These cookies do not store any personal information.
Non Necessary
Any cookies that may not be particularly necessary for the website to function and is used specifically to collect user personal data via analytics, ads, other embedded contents are termed as non-necessary cookies. It is mandatory to procure user consent prior to running these cookies on your website.
Save & Accept